It all started at a movie shoot in Oklahoma, on the set of “UHF” starring comedian “Weird Al” Jankovic. I was only 22 years old and I was proud that SFX supervisor Marty Bresin had hired me to work with him. In a particular scene the actor playing “Ghandi” (the producer, if I remember correctly), eats meat (!) at a restaurant, flanked by two beautiful models. One restaurant guest calls out “Hey, baldy!” and in true Weird Al fashion, “Ghandi” stands up angrily and pulls out a machine gun and starts spraying the restaurant with bullets! We in the SFX department spent several days rigging one hundred small explosive charges called “squibs”, hiding the ignition wires, taping them to table legs, and rigging the charge to get the most out of every one of these expensive little explosives. The rigging had to be done carefully so you would know where each charge was located , ensuring the firing path would follow a natural flow when the actor turned the gun shooting blanks from left to right. The firing was done using a “clunker box” with stepper relays salvaged from telephone exchangers!

“UHF” was my first squib-job, and from then on, I was often called up by productions wanting a bloody bullet hit. In big productions, nobody cared about the cost of a few expensive squib hits, but I was just as often contacted by stage plays or low-budget films, and suddenly the prize was a problem. The price of freight costs for explosive devices, a special effects technician with a pyrotechnics license, city filming permits for explosive squibs that cost $30-40 each, the cost of wardrobe items that would be destroyed in the process; all turned out to be pretty hard sells.  For many it would be prohibitively expensive with a few rehearsals that could cost up to $1,000 per day! And then consider what a stage play would cost for a full month including hotel and expenses just for that single simulated daily bullet hit!

In addition, you would not believe how many actors get really scared by the loud noise these things make! Really – women would cry, children would be terrified, animals would run, camera lenses had to be covered, earplugs had to be handed out to the crew, and the tough burly men often playing the hero-part would freeze up and be scared of both the impact and the loud noise in a way that revealed that these action heroes are just human too! In addition, laws stipulated the need for an on-set nurse to take care of injured actors and crew, should anything go wrong. And in those days people were unaware of the noxious lead fumes expelled by the exploding charge taped to the poor actor.

For years it bothered me that there did not seem to exist a clever solution for simulating the explosive effect of a squib without its drawbacks of danger, difficulty of transporting on an airplane – and cost! After all, it was just about having a small red splash appear on the part of the body simulating being hit! As a proud FX-man I have solved creative problems all my life, so who would be better at solving this conundrum than me? In this line of work I solved many challenges with compressed air and was often surrounded by air cannons to shoot out windows, dirt, simulated exploding grenades, wedding cakes, Christmas trees and I even shot out candy and sausages at a very unusual job. I sprayed water with compressed air on “The Abyss”, I had the opportunity to work on blood rigs for horror movies like “Friday the 13th” and created advanced pumping solutions to simulate bleeding arteries for training NATO surgeons. How could a small blood hit be so impossible to recreate using pneumatics instead of explosives?

When I started making smaller, portable compressed air units for clowns, actors and magicians on stage –  to magically extinguish candles, inflate bumps, muscles, and simulate “rapidly pregnant tummies” – a solution to the blood squib problem started to take shape. I eventually had lots of small tanks and valves that made it easy to create makeshift rigs shooting liquid through a shirt. The liquid was easy enough to squirt with the units – but it took some serious thinking and several prototypes to come up with a self-adhesive nozzle that redirects at a 90 degree angle the fake blood through a silicone tube running flat underneath the clothes, and to figure out how to blow it through fabric. I realized that the secret must be to remove all unnecessary space in the nozzle. In my workshop I made a crude nozzle soldering together leftover items. The new prototype worked like a charm! The water dyed red with food color blew through the fibers like a wind through a bug screen and it looked better than I had ever hoped for. I refined the design believing there would actually be a market out there. After all, the world was full of FX people who could benefit from this little nozzle. I invested in a commercial pour-in mold to mass produce the nozzle with melted Macrolone, which hardens into a durable item that can be used many times over. The Air Squib was born!

In the beginning I thought that FX people would just buy the nozzle and use their own rigs to shoot the blood though the nozzle and the shirt. Instead, from the very start people asked for a portable air unit to go with the nozzle. So, I quickly assembled a small radio-controlled receiver with an air tank that an actor can wear under clothing. The wireless control eliminates the need to run electrical squib-triggering cables down an actor’s pantlegs.  When triggered, the air unit blows 10 ml of blood through any standard shirts or pants. The customers liked it very much, so from then on, I packaged the full kit in a nice, foam-lined carrying-case with room for a high-quality air pump, a small accessories box and the transmitter and receiver. The receiver housing contains both the radio receiver and compressed air apparatus in a tough ABS-enclosure with belt loops, making it easy to attach on an actor. The director can now activate the “hit” by simply pushing the transmitter button at just the right moment.

I take great pride in using professional materials when building the units. High-quality parts ensure that the unit can shoot thousands of hits. Several units are used in military and law-enforcement applications, during severe training conditions and during repeated use to train field surgeons and lay people in how to respond in a real emergency.

Today there are more than 400 Air Squib units in action around the world. You will have great fun using them, and they will make it possible to instantly rig a dramatic, simulated bullet hit in an actor. Go ahead – get one too. People will love you for the special effects power the Air Squib gives you to create action everywhere!

Never miss out on a thing!

Subscribe to our newsletter to receive the latest news. 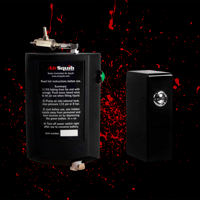 The Air Squib, is a pneumatic squib or air powered simulated bullet hit blood effect, that is mainly used for film, television or theatre productions to create the illusion of a performer being hit by a bullet. 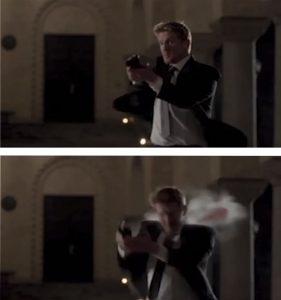 Want to simulate a bullet hit in an actor under 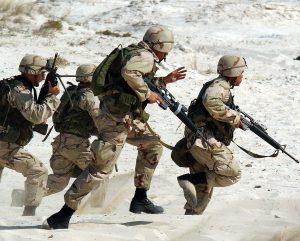 The air squib is great for simulating wounds in more

Want to simulate a bullet hit in an actor under